A great ceremony was held at University of Chakwal to inaugurate new Western Block, BS Block and Ali Baba Global Digital Training Program. The Minister for Higher Education Punjab Raja Yassir Humayon Sarfraz Khan was the chief guest and Deputy Commissioner Dr. Zeeshan Hanif was the guest of honor in this ceremony. 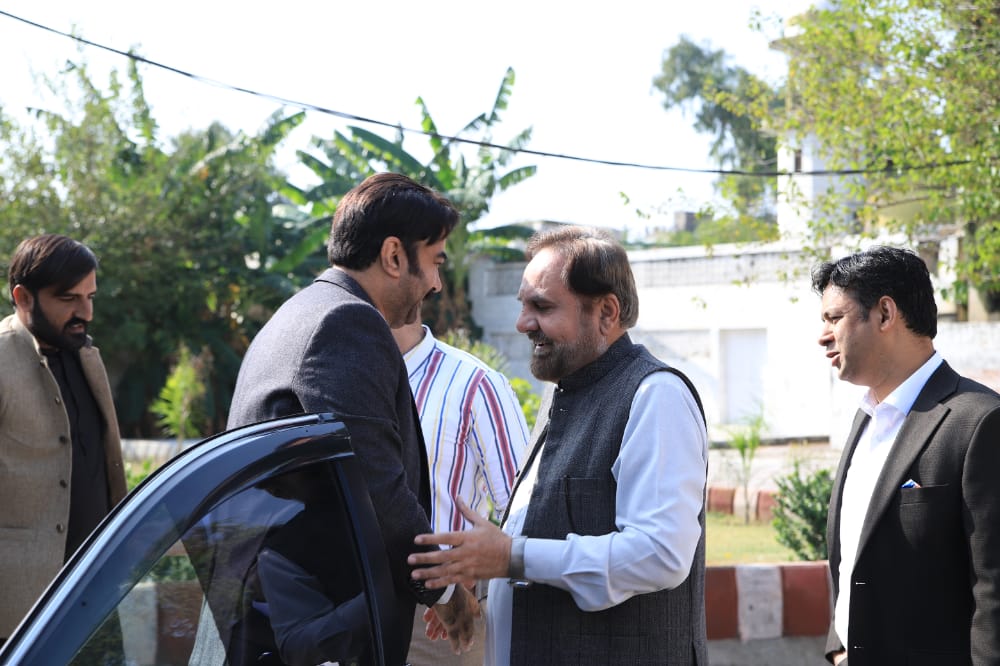 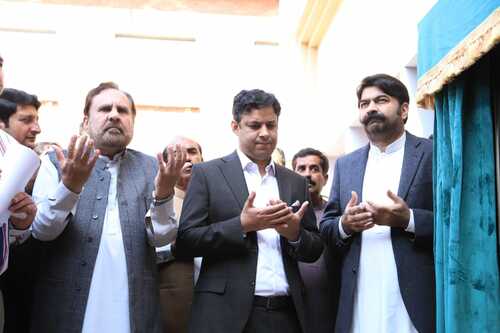 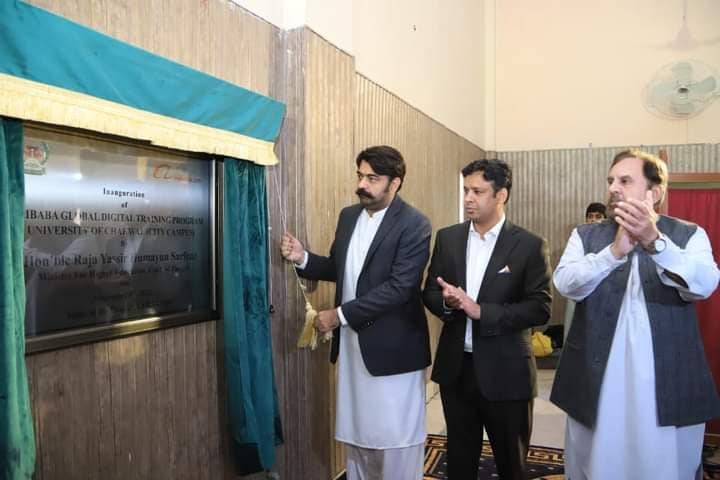 Dr. Muhammad Bilal Khan, Vice Chancellor of University of Chakwal apprised the audience of the recent development taking place at UOC. He thanks the Minister for his patronizing and waking special efforts for the progress and uplift of the University. In his address, he asserted that UOC was one of the fastest growing among the nascent Universities. And he informed the audience that Ali Baba Global digital training program worth thousands of US dollars which is given by Ali Baba freely to University of Chakwal by special efforts of the office of Research, Innovation and Commercialization (ORIC). 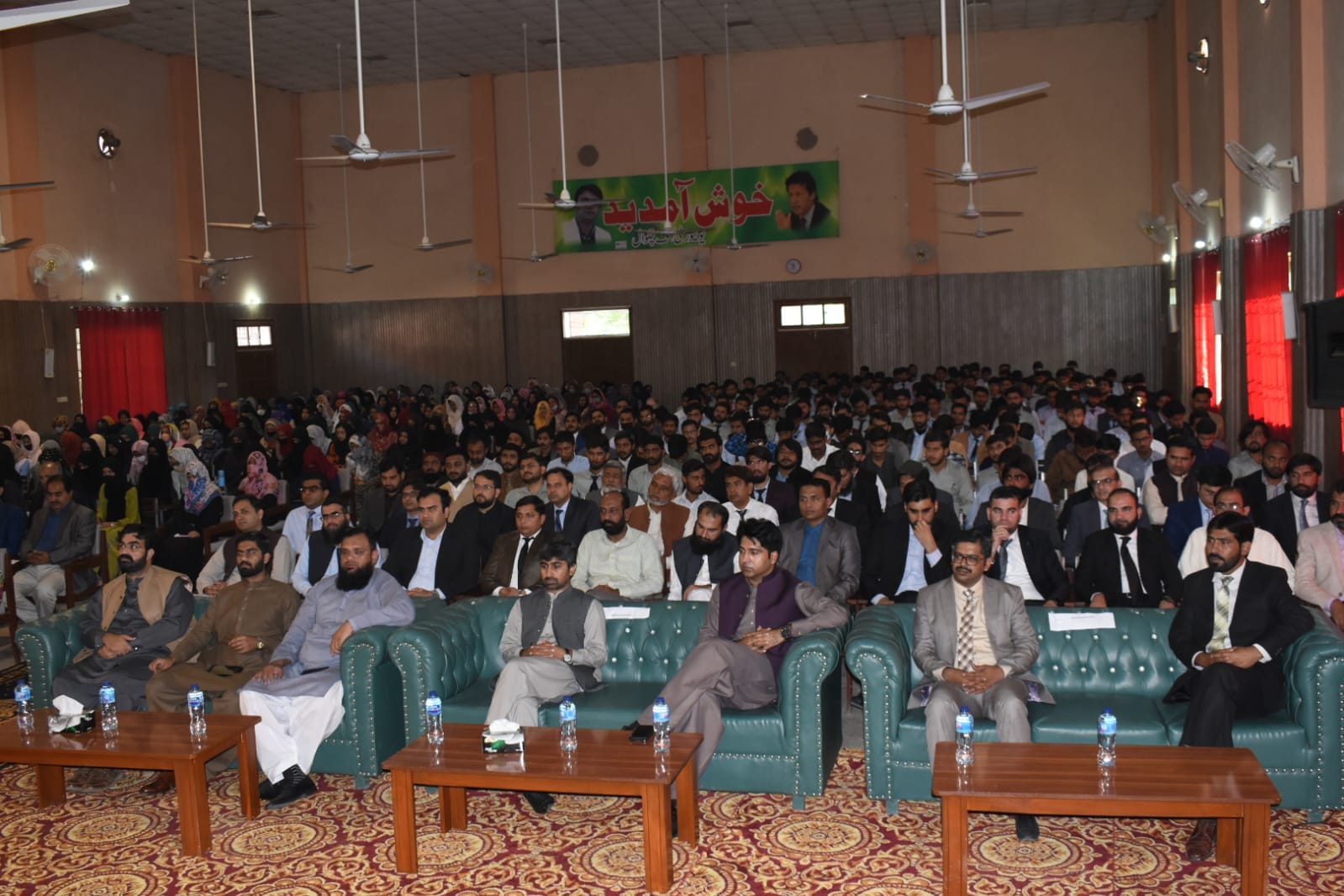 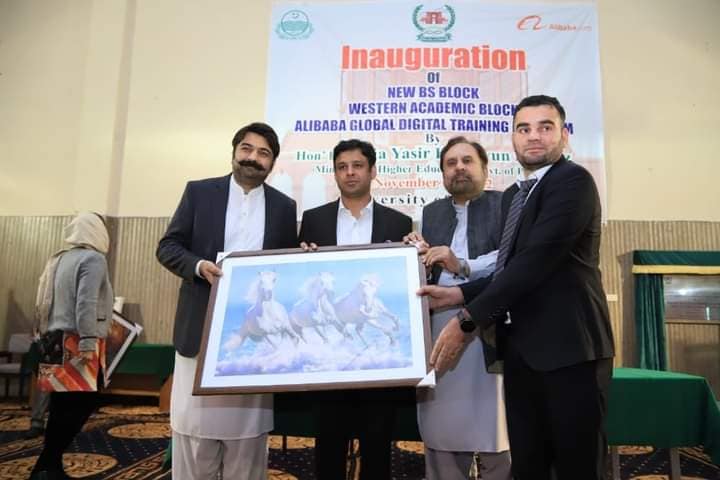 The Chief guest Minister for Higher Education Punjab Raja Yassir Humayon Sarfraz Khan appreciated the Vice Chancellor, faculties and administration in the efforts to shape the university according to the vision envisaged by him. He pledged his continued support for waking UOC as a hub of digital tech in the entire division and in the whole country eventually. The guest of honor deputy commissioner Chakwal Dr. Zeeshan Hanif urged the students to learn digital skills besides obtaining their degrees.

A Pride Moment for UOC!

Chairman of Mechatronics Engineering department is listed in the top 2% scientists of entire world.
Dr. Aqib Mashood Khan was born in 1990 and graduated with a Ph.D. in Mechanical Manufacture and Automation from Nanjing University of Aeronautics and Astronautics (NUAA). Currently, he is an assistant professor and chairman of mechatronics engineering at the University of Chakwal (UoC).
During his three years of Ph.D., he mainly focused on “sustainable machining of aerospace alloys”. He has been awarded an “Outstanding Student Award” by NUAA for his excellent performance and for proposing a novel method of machining aerospace alloys. Dr. Khan was also nominated for the best foreigner-student award at Higher Education Expo CHINA (HEEC). He worked with Chengdu Aerospace company, and he was also part of the team that developed the state-of-the-art J-10C and C919. He has published more than 100 SCI papers in the last decade and his research outcomes were cited 2150+ times by international scholars. He possesses Google Scholar h-index 27 and i10 Index (53). Ranked by Stanford University, USA, Dr. Aqib Mashood Khan is listed in the top 2% scientists of in the entire world.
After his Ph.D., he joined a QS-Ranked Chinese University as an Associate professor. He is also a prominent freelancer and currently providing online services to The Boeing Company and Rolls-Royce Motor Cars. He is a motivational speaker and delivered many speeches to national and international universities. After coming back to Pakistan, he joined the University of Engineering and Technology, Lahore (UET) as an Assistant Prof. (TTS-19) in the Mechanical Engineering department and served almost 2 years. Dr. Khan also worked with a team of international scholars from prestigious universities such as Imperial College London, University of Oxford, University of Cambridge, and the Opole University of Technology, Poland. Dr. Khan is also serving as associate/guest editor of various high-tier scientific Journals.

LITWITS, a bilingual conglomerate of creative writings by BS English students has been launched by the Department of English Language and Literature. The rich oeuvre includes letters,autobiographies, flash fiction and poems.
The worthy Vice Chancellor,addressing the editorial board,highly lauded the creative potential and literary genius of the students chisled by their dedicated teachers. He impressed upon the need to make sustained efforts like these to produce erudite body of alumni.
The respected Registrar congratulated the Head of Department, faculty and students for bringing innovation to the department. The HoD assured the Vice Chancellor and the Registrar that no stone will be left unturned for the uplift of the University.

One More Step From UOC In Internationalization

A memorandum of understanding (MoU) was signed between Turkey’s reputable USAK University and the University of Chakwal (UOC) to increase academic cooperation between the two institutions. The memorandum was signed by the Reactor of the USAK University Prof Dr Ekrem Savas and Vice-Chancellor of UOC, Prof Dr Muhammad Bilal Khan at a ceremony held at the Confrence Hall, University of Chakwal.
The two institutions agreed to cooperate on the exchange of students and staff in the context of the Erasmus programme. These committed to respect the quality requirements of the Erasmus Charter for higher education in all aspects of the organisation and management of the mobility, in particular the recognition of the credits (or equivalent) awarded to students by the partner institutions.


Vice Chancellor Prof. Dr. Muhammad Bilal Khan said that “To protect and wisely use our national assets is our prime responsibility; he further added “Pakistan is our identity and it’s a day to fulfill our commitments to this motherland’’ and “Every one of us should own Pakistan and everybody performing his/her duties honestly.’’


He stressed upon character building of new generation because the nation which does not have ethical values and characters cannot value her independence. He said that young students are the future of this country and they should use their fullest capacity for the progress of the country. We must look into the past, to get lesson but also move forward for better and prosperous Pakistan, he added.


The series of events in connection with Pakistan’s Diamond Jubilee celebrations continued for four days, under which competitions were held out in Qirat and Naat, Urdu and English Speech, and Essay Writing on the history of Pakistan. Shields were also distributed among the winners of competitions. At the end of the event, the Vice Chancellor announced prizes for the winners as well as appreciated and encouraged the efforts of organizers and cut a cake to celebrate the 75th birth of the country along with the faculty of UOC.

University of Chakwal Organized walk for the Solidarity on Kashmir. A large number of students, faculty members and staff, carrying banners, inscribed with slogans against Indian cruelties and human rights violations attended the rally.
The purpose of the walk was express solidarity with Kashmiris against brutalities of thec Indian armed forces in the held Kashmir. Participants and students said we all nation are with people of held Kashmir and would not left them alone. On this occasion prayers were also offered for the independence of held Kashmir and success of the Kashmiri brethrens. Participants urged the international community to take notice of the gross human rights violations in held Kashmir.

Chairman Department of Mechatronics Engineering, Dr . Bushra Nawaz on the direction of University of Chakwal organized a one day workshop on "Outcome Based Education (OBE) System " to give awareness about OBE to Faculty of Engineering and Technology. Professor Dr. Engr. Gulistan Raja from Department of Electrical Engineering, UET Taxila, was guest speaker of this workshop.

Team Pakistan Engineering Council (PEC) visited University of Chakwal (UOC). The purpose of this visit was to see the labs, faculty and infrastructure facilities available to students for the accreditation of Engineering department.

Worthy Vice Chancellor has their deep attachment with nature/environment by planting trees with the slogan “Go green!”. University management, faculty members, staff and students celebrated the day with great zeal and zest.


Worthy Vice Chancellor, Prof.Dr. Bilal Khan, opened the ceremony by planting a Olive tree in the Campus vicinity. Likewise, all the Department Heads, faculty, staff members and students planted various types of trees to beautify and improve the UOC-campus ecology.

Dr. Asif Mahmood Assistant Professor of Pharmacy, presented his research work entitled "hydrogels as drug carriers for controlled delivery of an anticancer drug" in Pharma Scientific Symposium and Poster exhibition at University of Central Punjab Lahore with the theme "innovation in Pharmaceutical Sciences and Future Challenges".